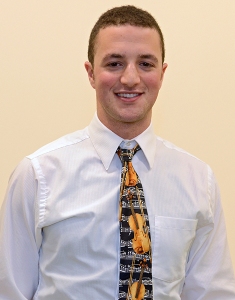 He enrolled in MCCC as a Liberal Studies major, and his decision paid off as he began to refine his career options.

“This particular major allows students to take a variety of classes and really figure out what they want to do in life,” explained Cohen.

Cohen has a thirst for knowledge and intellectual discussion with others, which is exactly why he joined the College’s Honors Program.

“I expected the classes to be more rigorous and wanted to interact with others that enjoyed learning,” he said.

The Honors Program has been Cohen’s favorite aspect of MCCC, especially the interesting discussions that take place in the classroom.

While he recognizes that clubs and organizations aren’t for everyone, he strongly suggests the idea of joining to others. As part of the Honors Program, Cohen became actively engaged in the Honors Club.

“A great benefit to joining the Honors Program is receiving a scholarship and that it’s one more accomplishment to put on your resume,” he shared.

Overall, Cohen is extremely satisfied with his college transcript and reflects on the moment he received his first 4.0 GPA by stating, “with some dedication and focus anything is possible.”

When he’s not focusing on schoolwork, Cohen enjoys playing the guitar and taking lessons, reading, exercising and serving as a lifeguard at the YMCA.

He will be graduating this May and hopes to pursue a career related to health care, because he enjoys helping others so much.

“I want to help others and directly impact people’s lives,” he said.

Cohen has not decided on a four-year institution yet, but looks forward to continued success built on the foundation he established at MCCC.