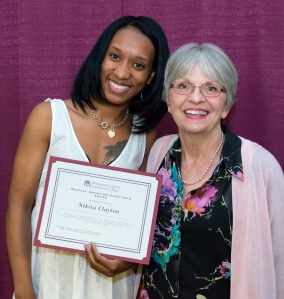 Nikita Clayton, 26, learned many valuable things during her education at Montgomery County Community College—especially from one special instructor, which one might expect, but also from her own children.

“It was Shauna LaMagna who taught me that, despite life’s trials and tribulations, you can still achieve your goals and that there are people who will genuinely support you and help you achieve them,” she said. LaMagna is an assistant professor in the College’s Medical Assisting Program.

“In addition to being a great teacher for many reasons, including making learning enjoyable, she is an amazingly genuine person. Her willingness to help me through my troubled times showed just how much she cares about her students. If there was one thing outside of a degree and certificates that Montgomery County Community College gave me, it was Shauna LaMagna,” she said.

Clayton’s academic career began at Gwynedd Mercy University, where she earned a bachelor’s degree in business administration. She also has a Master of Science degree in management. During her spring/summer 2012 semester, Clayton’s mother was diagnosed as having lung cancer, and her priorities shifted.

“Caring for her, as well as going to school full-time and raising my son, was not an easy task,” she said.

“Unsure about whether I wanted to follow a clinical or administrative career path in health care, I began my research to find a profession that would allow me to experience both aspects of the medical field and discovered medical assisting,” the Cheltenham Township resident said.

Following her mother’s death, Clayton found out she was pregnant with her second son. Complications with the pregnancy prompted complete bed rest and forced her to withdraw from classes until her son’s birth.

“Losing my mother and fighting to keep my son alive—while still trying to achieve my goals—were the hardest things I’ve had to do,” she said.

Working through her grief and with raising two sons, Clayton earned a Certificate in Medical Assisting, a Certificate of Completion as a Medical Office Assistant, and an Associate in Applied Science degree in Health Services Management, graduating in May 2014. She was named to Who’s Who Among Students in American Junior Colleges.

“The programs required many of the same courses,” Clayton said. “The College’s tuition was affordable when paying out of pocket, especially as a mother with, at the time, one child, who was reluctant to take out more loans to pay for school.”

At the College, Clayton was a member of the Medical Assisting Club, participating in Community Day and Community Health Screenings.

“Taking the lessons learned and knowledge obtained as a student at Montgomery Community College, it is my plan to begin working as a medical assistant, gaining the knowledge and experience necessary to excel in health care,” Clayton said of her more immediate goals.

But she is not content to stop there: “I’d like to return to school possibly furthering my education in healthcare in addition to obtaining a degree as a sign language interpreter.”

Her children are her biggest motivators.

“Without knowing it, they teach me the importance of always believing in myself despite what others may think is possible. They push me to keep working toward my goal and to never let the things I lack or life’s hardships that seem impossible to overcome stop me. My children teach me to appreciate the things that may be overlooked when wrapped up in the responsibilities of life: hugs, kisses, laughter, memories, peace, happiness, love, care, compassion, strength, and courage.”